Ideal for the transfer of digital audio between different digital equipment, the RB-SC1 sample rate converter standardises the sample rate of a digital audio signal to one of 32kHz, 44.1kHz, 48kHz or 96kHz, or to a synchronising input. Both audio inputs and outputs have push-button switches to select either AES/EBU or S/PDIF. The synchronising input can be selected from one of AES/EBU, S/PDIF or TTL word clock.

There are four modes of operation of the RB-SC1 dependent on how you want to synchronise the output to the input :

In this mode the digital output sample rate is simply set by, and locked to, the internal on-board clock generator. No sync signal is used or required.

There are also switches available to define the content of the channel status bits embedded within the digital audio stream. The channel status bits will be forced to Professional Mode for sample rates above 48kHz as they are not supported by the Consumer Mode. For sample rates of 32kHz, 44.1kHz and 48kHz, the status bits can be either set to follow the input signal type, or can be forced to either Professional or Consumer Mode.

For the digital outputs, there are three push-button switches to select the sample frequency (FREQUENCY), channel status bit type (CSDATA), and sync source and mode of operation (SYNC).

The FREQUENCY button allows selection of the master sample frequency from one of 32kHz, 44.1kHz, 48kHz, 88.2kHz, 96kHz, 176.4kHz or 192kHz. The CS DATA button defines the content of the channel status bits embedded within the digital audio stream, and can be forced to either Professional Mode (PRO), Consumer
Mode (CON) or to follow the mode of the input (FOLLOW).

The application for the X-Lock mode is so that the RB-SC2 can be inserted between 2 digital devices which run at different sample rates, such as a PC recorder and a digital player. Using the RB-SC2 in X-Lock mode ensures that the 2 devices remain synchronised at all times regardless of the sample rate of the 2 devices.
The SYNC button will also select the operating mode of the unit as described below. If an optional video sync board is fitted then 2 sync LEDs light together to show the active video sync.

In this mode the unit is synchronised to an external source, using the digital audio sync, or to the TTL level Word Clock. The FREQUENCY LED will indicate the synchronised sample frequency and if no sync is present, no output will be generated.

Here, the unit is synchronised to an external source, using the digital audio sync, or to the TTL level Word Clock. If no sync signal is present the unit runs from the onboard master clock at a rate selected by the front panel control (32kHz, 44.1kHz, 48kHz, 88.2kHz, 96kHz, 176.4kHz or 192kHz).

This operates like the auto mode except that if no sync signal is present the unit will run at the closest master clock rate to the last locked incoming signal. The FREQUENCY LED will indicate the synchronised sample frequency.

When operating in sync modes, the SYNC button flashes whenever the unit is not synchronised to the incoming sync signal.

There are 2 further push-button switches (INPUT 1 & INPUT2) that are used to select the input connector used for each of the 2 sample rate converter circuits. These switches select between AES/EBU, S/PDIF and TOSLink optical connectors. A red LED indicates when power to the RB-SC2 is on. 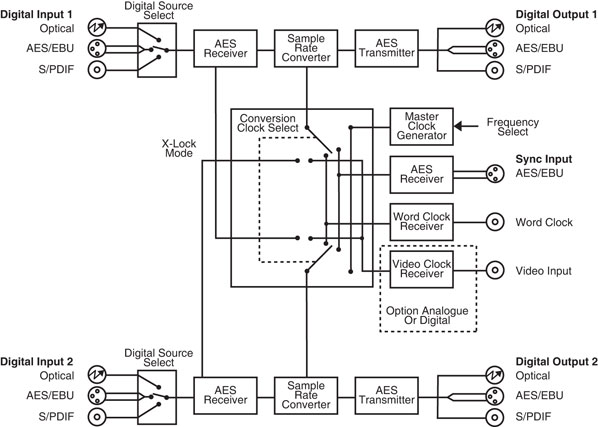 This website uses cookies to improve your experience while you navigate through the website. Out of these cookies, the cookies that are categorized as necessary are stored on your browser as they are essential for the working of basic functionalities of the website. We also use third-party cookies that help us analyze and understand how you use this website. These cookies will be stored in your browser only with your consent. You also have the option to opt-out of these cookies. But opting out of some of these cookies may have an effect on your browsing experience.
Necessary Always Enabled
Necessary cookies are absolutely essential for the website to function properly. This category only includes cookies that ensures basic functionalities and security features of the website. These cookies do not store any personal information.
Non-necessary
Any cookies that may not be particularly necessary for the website to function and is used specifically to collect user personal data via analytics, ads, other embedded contents are termed as non-necessary cookies. It is mandatory to procure user consent prior to running these cookies on your website.
SAVE & ACCEPT
STUDIO Sonifex RB-SC1